At the start of the year the infamous hacking group Team Xecutor announced an ‘unstoppable’ Nintendo Switch hack.

This made it possible to load pirated games onto the popular console, an opportunity many people have taken advantage of.

Some have taken it a step further by offering Nintendo Switch “modifications” for sale, specifically mentioning the Team Xecuter hack. This is what California resident Mikel Euskaldunak did, according to Nintendo.

In a complaint filed at a federal court this week, Nintendo of America accuses the man and several unnamed accomplices of various counts of copyright and trademark infringement.

“This modification is installed in a user’s Nintendo Switch in the form of a circumvention tool along with unauthorized custom firmware. This exploit allows the playing of pirated Nintendo Console Games,” the company writes.

Euskaldunak sold the mods in public through a profile at OfferUp.com. According to the advert, the Team Xecuter mod would allow buyers to play any Switch games they want.

“Just load and play!” In connection with the purchase of “Nintendo Switch Mod Play Switch Games Team Xecuter”, Defendants will “give [the buyer] a free game of [his or her] choice,” it reads.

In addition, the defendant also offered a 64GB SD card containing pirated games which could be loaded through Team Xecuter’s dongle.

“These SD cards will come with any 4-6 (depending on the game size) released Nintendo Switch games of your choice. That is less than the price of a single Switch game.” 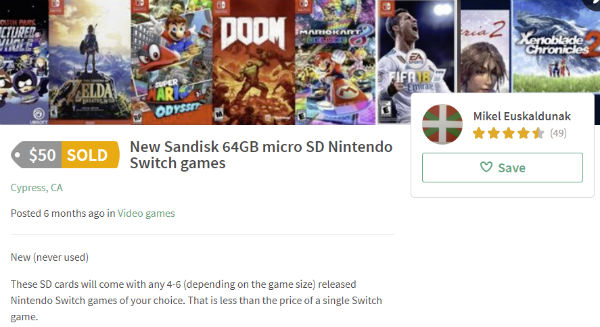 Nintendo believes that the defendants modified more than 100 Switch game systems. In addition, they are suspected of having access to a large library of Switch games, including dozens of titles that haven’t been released in the US yet.

Interestingly, the sellers are aware that pirating games does not come without challenges. They explicitly warn that games downloaded from the Internet might be tracked and banned by Nintendo.

“Defendants inform customers that Nintendo Console Games can be downloaded from the Internet, but that downloading from the Internet is not recommended because NOA can track the downloaded game and ban the user automatically when going online to play the game,” the complaint reads.

In addition to Nintendo Switch mods and games, the defendants are also accused of selling a modified version of Nintendo’s NES Classic Edition with over 800 games.

In its complaint, Nintendo of America asks the California federal court for an injunction to stop the infringing activity and destroy all pirates games and modded consoles.

On top, the game giant requests damages to compensate the company’s claimed losses.

A copy of Nintendo of America’s complaint, obtained by TorrentFreak, is available here (pdf).