Invented more than 15 years ago, BitTorrent has become the protocol of choice for file-sharers.

While BitTorrent is used by many pirates, the technology itself is neutral and does a lot of good for content creators as well.

This is also the message BitTorrent Inc, the parent company of the popular mainline and uTorrent clients, frequently communicated in the past. On numerous occasions, the company has distanced itself from those who download infringing content.

Last year, the company was acquired by TRON which will undoubtedly mean keeping to this course. However, the piracy stigma is persistent. That becomes clear when we look at a series of recent takedown requests issued by NBCUniversal.

The notices in question are addressed to Google. NBCUniversal has sent millions of these requests in recent years, most of which do indeed point out pirated content. However, the company also repeatedly flags BitTorrent’s official site, BitTorrent.com.

In fact, Google has received 387 reports containing BitTorrent.com URLs since it started keeping track, and more than three-quarters of these (293) came from NBCUniversal. As can be seen below, all recent requests for the domain come from the mass media conglomerate.

Recent takedown requests that include BitTorrent.com 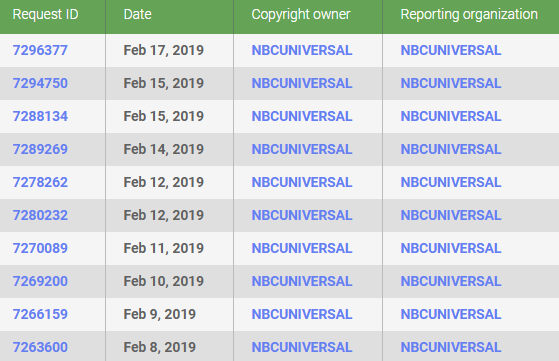 So what exactly does the media giant see as infringing pages?

According to a request sent last week, the Spanish download page for the Mainline client infringes the rights of the thriller “Dream House.” A few days earlier the company flagged the BitTorrent Speed and BitTorrent Pro pages, accusing them of linking to a pirated copy of the movies “About Time” and “Upgrade” respectively.

While the BitTorrent Pro page features a large “Upgrade Now” banner, that’s not the Upgrade NBCUniversal is after.

We have no doubts that this is an honest mistake and that NBCUniversal will correct their anti-piracy bots to prevent this from happening in the future. Still, it shows that these types of automated filters are far from perfect.

Luckily for BitTorrent, their website hasn’t been downgraded in search results, as Google caught the false positives before any real harm was done.